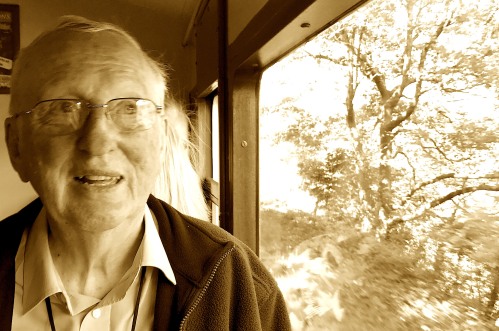 The Revd Canon William Hywel Watkins CStJ was born in Aberystwyth on 1 September 1936 and died there of pancreatic cancer on 13 July 2018. For forty years he served the Church of Wales as a parish priest, rural dean and Chapter Canon in South and West Wales, a region he fondly called ‘the periphery of the periphery’.

Watkins took great pride in his hometown, Llanbadarn Fawr, an important centre of early Welsh Christianity. He was schooled at nearby Ardwyn Grammar School Aberystwyth, and read history at St David’s College Lampeter, before proceeding to Wycliffe Hall Oxford in 1958 to read theology as an ordination candidate for the Diocese of St Davids. Deaconed at St Davids Cathedral by Bishop John Richards in May 1961 and priested the following June, he served a seven-year curacy in Llanelli. He was appointed vicar of Llwynhendy in Carmarthenshire in 1968. Ten years later, in 1978, he was made vicar of the Benefice of Uzmaston with Slebech and Boulston where he ministered until his retirement. From 1987 he was rural dean of Daugleddau and, in 1993, was made a member of the Chapter of St Davids Cathedral, occupying the stall of St Nicholas. In 2001, he retired to his family home on the ‘Costa Ystwyth’, as he called it, and was delighted to be able to rekindle old friendships in Cardiganshire.

Watkins was deeply committed to the ministry and outreach of the Most Venerable Order of St John of Jerusalem and, in 2000, was invested as Commander of the Order. From the twelfth century until the dissolution of monasteries, his parish Slebech had served as the West Wales headquarters of the Knights Hospitaller of St John. During his incumbency, the village’s ancient association with the Order was reinvigorated by regular St John’s-tide outdoor services in the picturesque ruined Hospitaller church on the Eastern Cleddau River. A gifted hymnodist, Watkins contributed many modern hymns for use by the members and cadets of the Order of St John, and throughout the wider diocese of St Davids. His ear for matching contemporary words to traditional and popular tunes was so much appreciated by his parishioners that one them challenged the vicar to write new words to Edelweissfrom the Sound of Music. He gladly accepted the challenge, he recalled: ‘I wrote a lovely hymn for the feast of the Blessed Virgin Mary’. His hymns celebrated the joy of salvation and the gladness that can be found in Christian service, and echoed the melodies and poetry of his own rich life.

An eager student of German, his commitment to post-war reconciliation was kindled at school. He first became aware of German opposition to the Nazi regime during the War: his German teacher at Ardwyn, Fräulein Einhorn, had fled the persecution of Jews and settled in West Wales. His recollection of her nickname for him, Starrkopf(stubborn boy), was as indelible a memory as his great sympathy for the plight of his teacher and her fellow Nazi victims. At university he sought out German students and made lifelong friends. Later, as a priest, he established similarly strong links with church leaders in the Evangelische Kirche of Bavaria and Baden, the twin state of Wales. A regular visitor to Germany, he shared in ecumenical worship and preached at the Church of the Resurrection, Pforzheim, the ‘Dresden of South-West Germany’. Built from rubble following the 1945 aerial bombardment that obliterated most of the city, the church was named for the new and liberated life that was able to emerge following the fall of the Nazi regime. For Watkins, the lasting physical and psychological scars for the people of Dresden and Pforzheim and other theatres of the Second World War were living memorials to the evils of war that further fuelled his own engagement in reconciliation.

His principal contribution to the work of international understanding, however, was opening his Vicarage to countless overseas visitors. Watkins was an attentive host, generous with his time, and proud of his ever-widening circle of ‘scattered and very dear friends around the world’, as he affectionately described us. There, on the quiet banks of the Western Cleddau river and, later, at his ‘Little Grey Home in the West’, he shaped a community of friends with whom he shared in laughter, poetry and music, discussion and prayer. Even when we had returned to our homes, he celebrated the enduring values of friendship and faith in his regular missives. ‘Politics always seems to end up in tears’, he wrote to me following the Brexit referendum: ‘for me, the Christian faith has so much more to offer’. It is in this faith, and to the sure and certain hope of the Resurrection that we commit him.

By melbournedean in Current affairs and news on July 16, 2018.
← Lives made just by Christ: Commemorating Martin Luther By your Word I am invited: Reaching for the Bread of Life →