A sermon preached by the Dean of Melbourne, the Very Revd Dr Andreas Loewe, at St Thomas’, Fifth Avenue, on the Feast of the Ascension 2015: 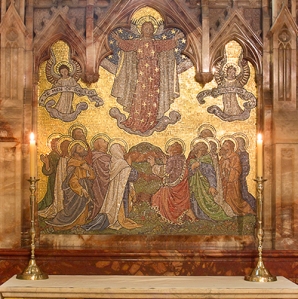 Thank you Fr Turner, for your kind inivitation to be with you today. It’s a delight to share in your celebration of Ascension Day in this magnificent church at the heart of New York.

I bring you greetings from St Paul’s Cathedral Melbourne, the seat of the Anglican Primate of Australia. At the east end of St Paul’s Cathedral stands our beautiful Ascension Chapel, with a magnificent golden mosaic, framed in gothic alabaster, depicting the risen Christ departing from his disciples. The ascending Christ stretches his hands out in blessing on his disciples as he is from them.

Our mosaic shows the disciples watching in worship, as Jesus stretches open the starry night sky, depicted in costly lapis lazuli, to enter a golden heaven. Two angels hold up scrolls with words from our first reading: ‘Men of Galilee’, the scrolls record their spoken words, ‘why do you stand looking up towards heaven?’ (Ac. 1.10-11).

Whatever the disciples may have thought as they looked on, it seems that for two angels Jesus’ ascension into heaven was no surprise. Indeed, Luke’s account in the Acts of the Apostles recounts the story matter of factly, as if these things happened every day. And while they may not exactly have occurred every day, Scripture does tell us about a number of people who ascended to heaven: the prophets Elijah (2 Ki. 1.11-12), Isaiah and Baruch all went up on high (Asc. Isa.), Scripture records.

Ascension to heaven, in Jewish tradition, was a gift of God to those whom he loved. Rather than see death, they would be lifted directly into God’s presence. In the case of Elijah, this took a spectacular form: the prophet was carried on high in a whirlwind, on a chariot of fire, drawn back to God by horses of fire (2 Ki. 1.11-12).

Jesus’ ascension, which we celebrate today, shares this aspect of the prophets’ ascent to heaven: it is an incredible display of the divine power at work within him. But unlike the ascension of the prophets, who attained glory without first tasting death, Jesus’ ascension certainly was not a way of entering heaven that bypassed death.

During a night-time conversation with Nicodemus recorded in the third chapter of John’s Gospel Jesus had spoken at some length about the idea of ascending to heaven. Then Jesus had told Nicodemus: ‘No one has ascended into heaven except the one who descended from heaven, the Son of Man’ (Jn. 3.13). In order truly to ascend to heaven, he first needed to descend to earth. In order to show to others the glory of God, he first needed to empty himself of that glory, by taking on our mortal life, Jesus explained to his secret disciple.

In our epistle reading from the letter to the Ephesians, St Paul echoes this insight: ‘When it says, “He ascended”, what does it mean but that he had also descended into the lower parts of the earth?’ (Eph 4.9). For Paul, ‘Jesus ascended’, doesn’t just mean ‘Jesus went into heaven’. Before Jesus could ascend to the heavenly glory, he first had to ascend to the cross, Paul assures his readers. 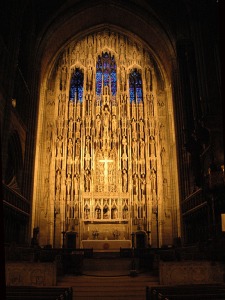 And you only need to look beyond me to the great stone reredos of this church to see what Paul meant: there, in the central panel, the ascended Jesus blesses us, his worshippers. He stands above the cross, to reinforce, in stone and statue, the point that it was when Jesus was lifted up high on the cross that he did, in fact, make his first ‘ascension’. Jesus ascended to the cross only to descend, to plunge the depths of suffering and death into hell in order to chain the powers that kept humankind captive. Paul explains: ‘he who descended is the same who ascended far above all the heavens, so that he might fill all things’ (Eph. 4.10).

This, then, is the first difference between Christ’s ascension and that of those who had ascended to God before him: Christ’s ascension is not a passive homecoming to God’s glory, but rather his active engagement with the powers that had kept humankind imprisoned in sin and death. It is, in fact, two ascensions. One that concluded Christ’s work on earth; the ascension witnessed by the disciples at the Mount of Olives celebrated this day. And preceding that, the ascension to the cross, celebrated on Good Friday. An ascension Christ made alone, deserted by almost all his followers, on another hill outside the city: on Calvary.

The second difference between Christ’s ascension and that of the prophets is this: unlike Elijah’s ascension, which really concerned only one man, Christ’s ascension was not a singular event. His two ascensions, both at Calvary and on the Mount of Olives, include and transform all people. Jesus not only takes captivity captive, but he changes those bonds that enslaved us and makes them the bonds that bind us together, so that we might become Christ’s own body.

Christ’s first ascension on Calvary meant that the lives of his followers and friends could be set free from death and sin. His second ascension on the Mount of Olives brought them the promise of the Holy Spirit, who would strengthen and equip those who love him. That, surely, is the true gift of Christ’s ascensions: the gift of people’s lives, redeemed and renewed, bound together in the power of his resurrection to be the body of his resurrection on earth.

‘When he ascended on high he made captivity itself a captive’, Paul cites the Psalms (Eph. 4.8). But equally important is what the Apostle says next: ‘He gave gifts to his people’ (Eph 4.8). And while these gifts are clearly of heavenly origin, they are not bestowed as it were by remote control, by a resurrected and ascended Christ safe in his heavenly home, but by the Jesus who, following his resurrection, walks among his disciples to teach them about the work of resurrection; who calls them back to enter into his service, and encourages them to become a body of believers that reaches out to the ends of the earth. The Jesus who, following his resurrection, bestows precious gifts upon them.

These gifts are various, and given in a multitude of ways. Firstly, the gift of resurrection itself, shown to the women at the empty tomb; the gift of understanding God’s word, given to the disciples fleeing Jerusalem on their way to Emmaus; the gift of peace and his Spirit, given to his frightened friends hiding behind the closed doors of the upper room; the gift of calling, bestowed to a disillusioned band of disciples ready to trade in their apostleship for their old lives at fishermen on Lake Galilee. And, as we anticipate the feast of Pentecost, we look forward also to the gifts of the Spirit: equipping, as Paul says, ‘some to be apostles, some prophets, some evangelists, some pastors and teachers, to equip the Saints for the work of ministry, for building up the body of Christ’ (Eph. 4.11-12).

There may well be times when we feel like those ‘men of Galilee’, the people who watched Jesus ascend to glory on the Mount of Olives. There are times when we, like them, may feel left behind, full of sorrow and unresolved questions. And it is at these times, I believe, that we need to remind ourselves that the spiritual gifts bestowed on them are still alive today. It is at times like these that we need to understand that the angelic word spoken to them is also addressed to us: ‘why do you stand looking up towards heaven? This Jesus, who has been taken up from you into heaven, will come in the same way as you saw him go into heaven’ (Ac. 1.10-11).

It is my hope that you and I will come to experience in our lives, and nurture in ourselves, the same gifts that Christ bestowed to his friends in the time between his ascension on the cross and his ascension to the Father. It is my hope that by these gifts we may be equipped to teach to others the work of resurrection. And it is my prayer that we may be shaped into the body of Christ, ‘joined and knit together by every ligament … building itself up in love’ (Eph. 4.16), to make known this message to those around us that even today find themselves ‘captives to captivity’.

Now to him who is able to do immeasurably more than all we ask or imagine, according to his power that is at work within us, to him be glory in the church and in Christ Jesus throughout all generations, for ever and ever! Amen.

A webcast of the service at which this sermon was preached can be heard here.